In the world of IT contractors terms such as IR35, Personal Service Companies and Managed Service Companies are often used. But what do they actually mean and what are the potential risks to the business engaging these skilled individuals? Here’s a quick overview of the basics.

Some companies will employ their developers. They will be paid a salary or an hourly rate, net of deductions for income tax and National Insurance Contributions (NICs) made via PAYE. The developers will enjoy the employment rights afforded to employees such as the protection against unfair dismissal after two years’ service. This arrangement is most suitable where the company wants to create a lasting relationship with the developer who will typically be working solely for the company.

Companies may engage developers on a freelance or self-employed basis; normally where they are required on a short-term project or to develop just one part of the end product. The individual developer will invoice the company and the developer will be responsible for paying tax by self-assessment together with the appropriate level of NICs. Sometimes the individual will set up a limited company (or personal service company) of which they have a controlling interest. The personal service company will then invoice the end-user of the services, and then the individual can usually pay himself in a tax efficient way from the income received by the personal service company. The developer may also need to register for VAT if his business turnover is more than the current VAT threshold.

Even if the parties label an arrangement as "self-employed" an individual may attempt to argue that, in reality, they should be treated as an employee of the end-user.  There are several tests which an Employment Tribunal apply in order to answer this question. This is usually argued where the individual wants to take advantage of the rights afforded to employees only. It is therefore important to ensure that freelancers and contractors don't start to look like employees as you could be exposed to liabilities. 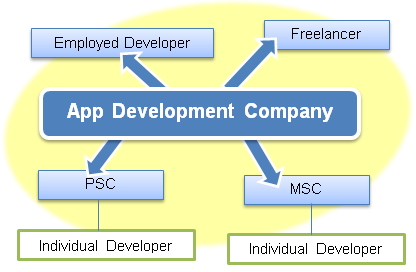 As set out above it is common practice for individual developers to supply their services through an intermediary, typically a PSC. The intermediary company invoices the end-user of the services and then the individual can, in theory, pay himself by way of dividends from his PSC. The advantage of such an arrangement is that dividends are not liable to NICs so the individual pays less in NICs than a directly-employed worker. Whilst corporation tax is payable on the profits of the company (after expenses), the arrangement should usually result in a significant income tax and NIC saving to the individual. The IR35 legislation was introduced in 2000 to deal with situations where the sole purpose of an individual's intermediary arrangements was to avoid liability for income tax and NICs. IR35 allows HMRC to look behind the intermediary and ignore the legal relationships to determine how the worker should be taxed. If an individual would, in the absence of the intermediary arrangement:

IR35 is not of huge concern to companies who engage developers via PSCs since if HMRC decide that an arrangement falls foul of the rules it will look to the personal service company and/or the developer for the shortfall.

MSCs are also intermediary companies through which the services of a developer can be provided to an end-user. In contrast to personal service companies, the worker in an MSC is typically not treated as being in business on his own account and does not have control over the business. This control lies with a third party scheme provider which is usually a business that provides the company structure and administers the schemes for the individuals, before invoicing the end-user and paying the individual a combination of salary and dividends, which has tax advantages . A more detailed definition of an MSC is given by the relevant tax legislation. The key difference from the IR35 regime is that all sums received by an individual as a result of participating in an MSC scheme are automatically subject to PAYE and employed earner NIC. There is no need for HMRC to analyse the situation as there is with the IR35 legislation.  Most importantly, if HMRC is unable to recover any shortfall from the MSC then in certain circumstances it is entitled to seek recovery from related third parties such as the end-user.

If you would like to discuss any of the issues raised above then please contact one of our employment lawyers or commercial contract lawyers on 020 7234 0200.