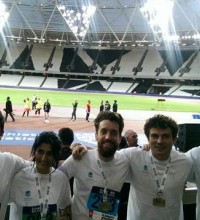 A team of five Waterfronters (including Jean-Marc, Anthony, Punam and Philip) swapped their usual office attire for shorts and trainers when they participated in the inaugural Diamond Relay at the Olympic Stadium on 27 July 2015.

The race - which was organised by British Athletics - gave businesses the opportunity to be the last runners on the historic 2012 Olympic track (which is due to be scrapped shortly to make way for West Ham United).

During the evening, each of the team members ran 5 kilometers and the team completed the relay in an impressive 2 hours, 3 minutes and 15 seconds.  However, the performance of the evening went to team captain, Jean-Marc Pettigrew, who ran his stint in a sprightly 18 minutes and 34 seconds.  When he’d got his breath back, Jean-Marc said: “It was great to have the opportunity to run at the Olympic Stadium, following in the footsteps of the likes of Usain Bolt, Jessica Ennis-Hill and Mo Farah – albeit a little more slowly. There was a brilliant atmosphere and I hope it will inspire the Waterfront team to greater sporting feats in the future”.

Waterfront’s newly formed relay team intend to partake in similar events in the near future, so we will keep you posted!