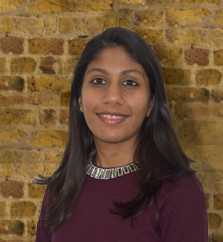 Deeva is a Trainee Solicitor and joined the Waterfront team in February 2020.

As a trainee, she has the opportunity to work in all the firm’s areas of practice simultaneously. She enjoys being able to be involved from the onset and finds it intellectually stimulating.

Prior to joining Waterfront, she was a paralegal in a boutique commercial law firm and later joined the in-house legal team at Jellycat, a soft toys company where she worked in brand protection and intellectual property.

Deeva completed her undergraduate degree at Keele University. She then moved to London to complete the LPC LLM at the University of Law.

Outside of work, she enjoys travelling and the outdoors. She is also passionate about learning languages and can speak Gujarati, Kiswahili and conversational German.